Like many newly married couples, we were over the moon to learn we were expecting our first baby!  We vividly remember us deciding the entire ride there if we should find out whether we were having a boy or girl. Soon after arriving, we quickly learned that instead of finding out our baby was a boy or girl, they’d take us to a private room to tell us the words that too many families hear, “There is something wrong with your baby’s heart.” They continued to tell us our sweet baby needed a minimum of 2 heart surgeries before celebrating a first birthday for the heart defect we could barely pronounce, Tetralogy of Fallot. We remember thinking, this is the worst day of our lives! We’d soon find out, it wouldn’t be and this diagnosis would bring some of life’s best and worst moments. 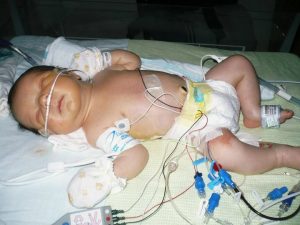 In October 2008, our sweet boy Luke was finally here. At one week old, Luke had a heart procedure (BT Shunt) and spent his first month of life in the hospital. This was a temporary fix until he could have his next surgery. He continued to grow and hit some developmental delays but always achieved them just when we started to be concerned. Luke was the happiest baby and easy going. At 9 months old, Luke had his first open heart surgery. His surgery was on Wednesday and by Saturday afternoon, we were home. We could not believe how amazingly well he recovered. For over 4 years Luke strived as a “normal” kid with regular visits to the cardiologist every 6-12 months. Over the years, we met heart families from volunteering with our local hospitals and often felt guilty of how well Luke thrived. We even had some guilt that other families struggled with unexpected surgeries, months of being in the hospital and even the loss of CHD. Still our family felt so much joy in working with our Illinois hospitals, connecting with other heart families and supporting them in their time of need as we wished we had when we were diagnosed. 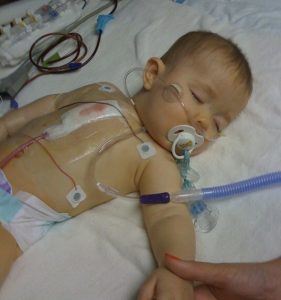 In September 2013, Luke was admitted to the hospital with a stomach bug. Doctors determined that some of his organs had started to shut down due to severe dehydration from the stomach bug. We were shocked as Luke’s stomach bug had only started the day before and we brought him in right away. The hospital struggled to diagnose why this was happening in such a short amount of time. Over the next few days, Luke’s health seems to be a roller coaster ride with ups and downs. The medical team couldn’t figure out why his health continued to go back and forth. This was the day we realized that we would actually experience the worst day of our lives. The medical team determined it was best to intubate Luke until they figured out why his health was declining. As he was being intubated, Luke coded. Just like in the movies or Grey’s Anatomy, more staff ran in to help. It was really surreal to know that this was happening to our child.

After Luke was stable, more echoes and MRI’s of the heart were done. It was finally discovered his left pulmonary artery had completely closed and was not supplying enough to his left lung. This was the missing piece to the puzzle. When the team was hydrating Luke during his admission, they were giving him enough fluids for two functioning lungs. In actuality, all the fluid was going to one lung. Because the fluid in his body had nowhere to go. Luke was essentially drowning and intubating him was the chance for the fluid to escape, causing him to code. After realizing this the team was able to care for Luke and get him on the road to recovery after a few more weeks in the hospital. Since then, Luke has been running on one fully functioning lung and will continue to do so hopefully into old age. Today, we don’t foresee any surgeries for Luke and continue to see the cardiologist yearly and catheterization as needed. 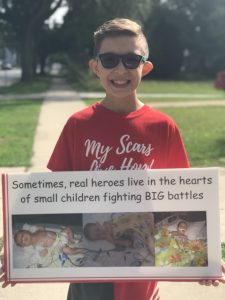 Since that day, Luke’s unexpected case has been in research studies to help others. Luke has been the greatest blessing and we continue to be thankful for every day and all the little things in life! We share Luke’s journey in hopes of helping other CHD families and spreading much needed CHD awareness! Thanks to the Conquering CHD, we have helped to build a local community of resources and support working with our Illinois hospitals. We’ve had the honor of attending Conquering CHD’s Advocacy Conference where we shared Luke’s heart story in Washington D.C. in front of Congressman and Senators to advocate for CHD research. We continue to have a love and hate relationship with Congenital Heart Disease. We wish we could take away all the things Luke has endured his entire life from hospitalizations and procedures. We are also so thankful for the lifelong friendships and impact we try to make in the CHD World. 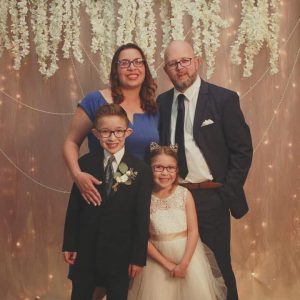