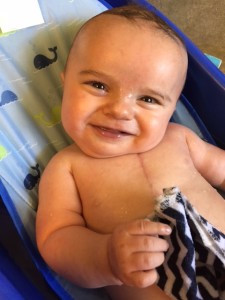 I will never forget hearing my husband ask the doctor “Why is he purple? Why isn’t he breathing?” immediately after Adam was born.

He was our third child, the other two were born healthy babies and we had no reason to believe anything would be different with Adam. However, he was quickly taken out of the room for testing. Within 6 hours of being born Adam and I had both been discharged and were heading to UF/Shands so that more testing could be done. Before they transported Adam they brought him into the room while he was in his mobile ICU. This little boy who I had not yet been able to hug and kiss looked very peaceful and content but the tubes, wires, bandages made for such an unexpected scene. Inside I kept thinking “Everything is going to be fine, the staff is just being extremely thorough but everything will be fine. He probably has a small hole in his heart, I’m sure we’ll be sent home with medicine and the hole will close on it’s own.”

Five hours after arriving at Shands, two doctors sat us down. “Your son has a severe heart defect.”

Those words were so heavy.

They told us Adam had tricuspid atresia. His tricuspid valve never formed and sub sequentially his right ventricle had never formed.

“Is he going to die?”
“Will we ever take him home from the hospital?”
“Will he ever meet his older brother and sister?”

Of course these questions immediately overwhelmed me, although I was too scared to consider asking. After the long discussion Adam and his anatomy all I could ask without being scared of the answer was “What advice can you give us?” As one doctor stared blankly I will never forget how the other popped in “You’re going to have three kids, you will love them all the same, one will just have a different heart.” And with that response I was immediately filled with hope. Hope that Adam wasn’t going to die, hope that we would take him home from the hospital and hope that he would meet his brother and sisters.

Adam was blessed with great anatomy as far as TA babies are concerned, he was able to skip what is typically the first of three procedures. On October 22, 2014, four days old, Adam was discharged with no oxygen, no medicine, nothing. We had weekly cardiology appointments and the plan was for him to have his first open heart surgery around 4 months. During this waiting period Adam thrived, he was doing a good job putting on weight and staying healthy.

At 14 weeks old he had his first open heart surgery, the Glenn. There were ups and downs but after just 6 days he was discharged. The surgery was tough, the days and nights post surgery were even harder. However, all of that was finally behind us and we were excited to live life with surgery behind us and Adam in a stable condition.

He will have another open heart surgery, the Fontan, when he is about 2 years old.

We feel so honored to be Adam‘s parents, this little guy is truly amazing.