Last week we discussed the issues that can cause the heart to beat too slow. This week, we look at what happens when the heart beats too fast. Carol Raimondi, completes part two of her resource on arrhythmias, this time covering tachycardia.

There are many types of tachycardias, but here we will focus on the most common tachycardias seen in congenital heart defects. When diagnosing these arrhythmias, the same tests as mentioned in part one are used to determine the arrhythmia. The only additional diagnostic test that is common with tachycardias, is an electrophysiology study (EP study). This test helps to confirm diagnosis and locate where an arrhythmia originates. It is done by a cardiologist who specializes in heart rhythm disorders in the EP lab. This is an invasive test where thin catheters are placed through the arm, leg and/or neck, then threaded through the blood vessels to the heart. The doctor can then use these to map the electrical conduction of the heart and reproduce arrhythmias in a controlled setting. This is very useful in planning for treatment.

This refers to a heart rate that is more than 100 beats per minute.  Common reasons this occurs is due to a physiologic response to exercise, fever, dehydration,stress, pain, or stimulants, such as caffeine. When the factor that caused it is resolved, then generally, the heart rate returns to normal.

A-Fib, as its often called, is the most common type of tachycardia. It occurs when, instead of the sinus node initiating the electrical conduction, there are many different impulses firing throughout the atrium. This results in a fast and very chaotic rhythm. Since it is so fast and irregular, the atria quiver or “fibrillate” and are unable to effectively squeeze the blood into the ventricles. A-Fib can come and go, or it can be continuous. Symptoms may include palpitations, lightheadedness, shortness of breath, fatigue or fainting, though some patients have no symptoms at all. The main concerns with atrial fibrillation is the increased risk of stroke and heart failure. As the atria are not emptying fully, blood can pool within the chamber and form blood clots.The clot can then travel to the brain and cause a stroke. Also, the irregularity of the rhythm makes the pumping action of the heart less efficient. If this continues for a long period of time, it can weaken the heart muscle, causing heart failure.

Supraventricular, or “above the ventricle”, tachycardia, is also referred to as atrial tachycardia, It occurs when there is an extra conduction pathway in the atria, usually present since birth, that creates a loop of overlapping signals. This arrhythmia is rarely life threatening. It is not uncommon for the atrial heart rate to get up to 300 beats per minute during an episode of SVT.  An episode may last for a few seconds up to a couple of hours. Symptoms of this include palpitations, feeling as though your heart is “racing”, lightheadedness, or shortness of breath. If the arrhythmia lasts for more then 20 minutes, it is recommended to go to the emergency room to receive medication to treat the irregular rhythm.

This refers to a very fast heart rate the comes from abnormal electrical signals in the ventricles, or lower chambers, of the heart. Since the heart rate is so fast, it does not allow adequate time for blood to fill into the ventricle, thus a much lower amount of blood is delivered to the body. These arrhythmias may last only a few seconds and not cause any issues. If it continues longer than that, it can be very serious and requires emergency treatment.  Symptoms are similar to the other tachycardias, but fainting can occur if it is sustained for more than several seconds.

This occurs when very fast, chaotic impulses in the ventricle cause it to quiver, or fibrillate. When this happens, blood can not  be pumped efficiently to the body. This is considered a life-threatening emergency if not treated within minutes and requires a defibrillator to “shock” the heart back into rhythm.

Treatment of tachycardia can be divided into two separate categories, prevention of arrhythmias and treatment during an arrhythmia.

Catheter Ablation- This is an invasive procedure that, like an EP study, involves insertion of small catheters through the arm, leg, and or neck, that are threaded through blood vessels into the heart. Once the abnormal circuit is found, the catheter uses either heat or extreme cold to damage the extra pathway, thus preventing it from allowing the arrhythmia to occur.

There is a class of medication know as anti-arrhythmics that doctors can prescribe to help prevent fast heart rates. These may be used in conjunction with other cardiac meds, such as beta- blockers or calcium channel blockers, to provide optimal coverage in keeping the heart rate and rhythm regular. Another class of medication that is used frequently for atrial fibrillation is anti-coagulants, or blood thinners. Warfarin, or Coumadin, is still the most commonly used type of blood thinner, but there are newer medicines that can be used as well. While blood thinners do not prevent atrial fibrillation, they help prevent blood clots from forming, thus reducing the risk of stroke associated with this arrhythmia.

When a fast heart rhythm, such as A-Fib, is not successfully prevented by medicine or catheter ablation, a pacemaker can be used to help control the arrhythmia. As discussed in part one, a pacemaker will watch the heart for abnormal rhythms, and then initiate the correct conduction when needed.

Similar to a pacemaker, this small device is surgically implanted under the skin. It has leads that are threaded through a vein into the heart. The ICD then “watches” the heart, and, if a dangerous arrhythmia such as ventricular tachycardia is detected, it will deliver electrical shocks to the heart to restore a normal rhythm. The device is programmed with specific parameters so that the device does not shock inadvertently. It sends data wirelessly to the physician via an in home monitor, and also requires semi-annual visits to the pacemaker/ICD clinic for a full interrogation.

Though rarely done for arrhythmia prevention alone, a surgical procedure can be done to block the abnormal pathways. Known commonly as a MAZE procedure, a number of small incisions are made in the heart tissue in a specific pattern. The scar tissue that forms from these incisions does not conduct electricity, so the abnormal pathway that was causing the arrhythmia is blocked. This procedure is usually done if the patient is having open heart surgery to treat another heart disorder.

Treatment During an Arrhythmia

The vagus nerve is responsible for heart rate. There are certain maneuvers that affect this nerve, and can be used, with physicians instruction, to help lower a fast heart rate. Some of these include coughing, bearing down (as if having a bowel movement), and applying ice to the face and neck area.

Cardioversion can be done to help “reset” the conduction system of the heart. It may be performed as a scheduled procedure for someone who has had ongoing atrial fibrillation.This is done while the patient is sedated in a controlled setting with a lower amount of electricity. It also is used in emergency situations when ventricular tachycardia or ventricular fibrillation is present. This is done by placing paddles or patches on the chest. Then, a charged current is delivered that affects the electrical system of the heart and intends to restore a regular rhythm. 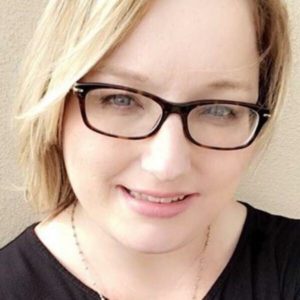 Carol Raimondi is an adult CHD patient and nurse, living with Congenitally Corrected Transposition of the Great Arteries.  She has had 4 open heart surgeries in her 40 years, as well as a pacemaker since the age of 6. After spending a large part of her childhood in and out of hospitals, she developed a passion for nursing. She went to school to become a cardiac nurse. Carol’s many hospital experiences helped her as a nurse to better understand what her patients were going through and  to care for them with that much more compassion and empathy.

Due to worsening medical issues, Carol had to give up the profession she loved. That did not stop her from being a patient advocate, however. She joined her local hospital’s’ Patient Family Advisory Council, which she now co-chairs, and shortly thereafter she joined Mended Little Hearts Chicago(MLHC) as an adult CHD liaison. She then expanded her work in the CHD community by starting an adult and teen CHD group within MLHC and became an  Ambassador for the Adult Congenital Heart Association. Currently she sits as the Conquering CHD of IL(CCHD-IL)  President. Her proudest moments are when she is advocating and raising awareness for the CHD community, both on Capitol Hill in D.C. and locally.