In May, CCHD honored Heart Moms for Mother’s Day. This month, we’re taking time to shine a light on the great Heart Dads out there, who conquer CHD along side us and are often unsung in the fight. This week, Joe Valente, an adult CHD patient, thanks his dad for the sacrifices he made a long the way and talks about why sometimes men seem to be in the background when it comes to  the CHD Family journey. 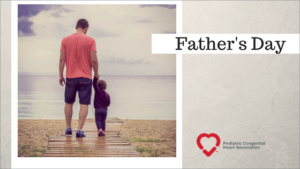 My father used to have a fond place for box kites and I remember many a summer being dragged across the windy beaches of Northern California by his kites.

As I sit hear with my next chapter in my CHD journey unfolding I am reminded of all that has been sacrificed to get me here and as Father’s Day is approaching it is hard to not think of all the CHD dads that make this world go around including my own. The world of Congenital Heart Disease is in a rapid state of flux. Since the day I was born over 36 years ago survival rates for critical congenital heart defects have improved beyond belief, but maybe more importantly the community of patients and parents that are able to connect through the internet and organizations like the CCHD have drastically changed the knowledge and support for everyone affected by CHD.

Being a male in the CHD world is difficult, there are not many emotional resources for the men that need support, the fathers who are helping their child fight, or those that are grieving a loss. Maybe it is our own doing and what society expects from us, but it is often a lonely road to walk. I enjoy seeing the fathers that are public about their battles and the men that share their journey with CHD with the world. So, while so much has changed the men are often stuck in yesteryear as they are expected to be strong through all else and have little escape or resources to coupe with daily struggles that accompany CHD.

As I was going through some childhood belongings the other day I found an old guide to CHD from the American Heart Association, copyrighted 1978. It is quite an enlightenment to read, as it was the only real resource that my parents had outside of the hospital. In this information era it feels like reading a tri-fold brochure when you want an encyclopedia. It is a good reminder for all of us fighting for more to not forget to be thankful of how far we have come.

As most fathers mine was observing my birth but for him it was in the same hospital that he had already delivered so many babies as an OBGYN. So, when I was delivered and was extremely cyanotic I wonder at what point he really knew. I know my mother tells the story of the pediatrician telling her I was being transported to UCSF and to call the priest. But I know my father knew before that—maybe from the moment he saw me—or was he blinded by a fathers love like so many parents who don’t see what may appear as obvious looking back?

I was blessed that my father was one of my biggest advocates when I was young, being a doctor he was knowledgeable enough to know when things were not right. I can say without hesitation that he saved my life. I know his grief was significant as anyone that was there would tell you he could barely walk into the hospital to find me after my transport. And when I was not on the floor they thought they assumed the worst. Like so many father’s I am not sure who was there for him, of course my mother and family, but who was his strength? Maybe all he needed for his strength was me to be there and to keep fighting.

My dad never let his medical knowledge and any fear of looking like a dumb parent get in the way of following his gut. When I was 9 months old one week after getting a the “see you in a few months” clearance from cardiology I began to go downhill. My father new something wasn’t right and immediately called my cardiologist. As my pediatric cardiologist still does, and I believe any good doctor should, he listened to him told them to come down as soon as they could. Upon setting eyes on me my cardiologist turned pale. He had never seen a baby decline so fast, he had only seen me a week before and I was “healthy.”

My father didn’t stop there when the surgeon came and gave the consult on a Friday afternoon and told my parents he would operate on Monday my father told him I didn’t have until Monday. The surgeon was adamant that I would be fine and that when he got back from his weekend vacation he would do the surgery. That wasn’t good enough, so my dad kept pushing finally he agreed to operate same day. After the surgery, the surgeon came out of the operating asking my father how he knew, he questioned how many hours I had left, not days, as I had formed an aneurysm in my trans annular patch that was placed when I was just 2 days old, and it was about to rupture.

As I have grown into a man, I think of all the nights my father was out delivering babies and how at 76 he still works 4-5 days a week. Not much has changed in my 36 years, except now I am the one in charge of my care. The lessons my parents taught me are what has led to me to search for a life of meaning. Not only for me but for everyone I love. I have had many moments in my life when I was required to trust my gut, and I have never seconded guessed it, because I learned at a young age the significance of doing so. I will always appreciate the medical professionals who take a pause and listen when I say something isn’t right.

I know that fathers may often seem hidden in the world of chronic illness and CHD, but it is not representative of their role. Many are at home and work, keeping the rest of the world moving while we fight our battles in hospitals and doctor offices. Many are out there advocating for us. They may not be the faces on our Facebook pages, but we know what they do and have done for us, and we are forever grateful. Maybe one day it will be the posh thing for dads to wear their emotions on their sleeve for the world to see, but until that day we must not forget of everything they contribute to us and our families. Regardless of their fame or the lack thereof we know their love is unwavering.

The twine on your kite is as long as you want it to be. Always set it loose and reach for the blue skies. Let it fly high in the wind. If a breeze catches you let it pull you to where you were meant to be. Never give up on life. Fly free and you will be amazed at what you can be.

I think of my father and being pulled across the beach as I look up for all that can be. A happy Father’s Day to my dad and all the CHD dads out there that mean so much to us and our families.

Joe was born with Tetralogy of Fallot. He required his first open heart surgery at 54 hours old and suffered a stroke after surgery. He has now had four open heart surgeries, the last two days before his 30th birthday. He has struggled with PTSD for most of his life and believes a strong mind and building a team with a roster full of supporters is the key to successfully living with a chronic illness. He is a Board Certified Patient Advocate for families, children, and adults with congenital heart disease—helping them to navigate the emotions, diagnoses, and challenges they face in finding and understanding appropriate CHD care.