An often unspoken topic with members of the CHD community is PTSD. For the first piece in our Mental Health Series, Brittany Foster, born with a VSD as well as other conditions, shares her experience with the illness, and how it has affected her life and her perspective.

“Doesn’t matter how tough we are, trauma always leaves a scar. It follows us home, it changes our lives, trauma messes everybody up, but maybe that’s the point. All the pain and the fear. Maybe going through all of that is what keeps us moving forward. It’s what pushes us. Maybe we have to get a little messed up, before we can step up.” Alex Karev, Grey’s Anatomy

For the last 26 years of my life I have experienced trauma.  Those of us living with CHD have been through more traumas than we can count. According to the National Childhood Traumatic Stress Network, there is a specific type of trauma called medical trauma. Their definition states, “medical traumatic stress refers to a set of psychological and physiological responses of children and their families to pain, injury, serious illness, medical procedures, and invasive or frightening treatment experiences. These responses may include symptoms of arousal, re-experiencing, and / or avoidance. They may vary in intensity, are related to the subjective experience of the event, and can become disruptive to functioning.” The last five years that I have spent going to talk therapy, either once or twice a week, has helped me reflect on my traumas. Therapy has helped me to realize just how deep rooted a lot of my fears, insecurities, and worries are. My stress reactions may seem over the top and hard to explain. How can I possibly cry for hours over something that seems so simple? How can I sit there shaking at the smallest amount of pain but can endure more severe pain through my surgeries? What may seem like an exaggerated reaction to people observing my behavior, is actually a response due to post traumatic stress. 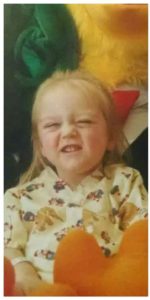 PTSD took many different forms throughout my childhood. I always had a constant fear of my sisters being kidnapped or going missing. For the majority of my childhood from age 6 to 12 I would cry my eyes out when I lost sight of them. “Mom, you were supposed to be watching them!” “Where are they!?” “They are gone.  Someone took them.  They drowned in the ocean.” I recall being terrified at sleepovers and crying to go home because I wasn’t around to watch them.

Reflecting on this time in my life, I am now more aware of exactly why I felt this way. Realizing why you feel a certain way really helps you make sense of how exactly to manage this type of traumatic stress reaction. Just treating the anxiety won’t make it go away and just labeling my behavior as “anxiety” didn’t help me. This “on edge” or “on guard” behavior was because I had a general lack of trust in the outside world. When I was younger I felt as though I was the only one who could protect them. Everyone else, including my parents, were not good enough to watch them. My deepest fear of my sisters being taken from me was directly tied to those who were a huge part of my life who hurt me. I didn’t realize when I was younger that even though the surgeries and procedures hurt, it didn’t mean these surgeons, doctors, and nurses were bad people. I didn’t realize that just because my parents had to leave at a certain point before surgery or during a test, it didn’t mean they weren’t able to protect me. It didn’t mean they were not competent enough parents to know where my siblings were. This lack of trust carried over into relationships as I got older but never was as extreme as the days I didn’t trust anybody to be around my family and me.

Anxieties as I got to junior high and high school became something different for me. I developed obsessions over things I never obsessed over before. My thoughts revolved around being a perfectionist in school. As soon as I had a project, I needed to get it done that day, or I would obsess over it. I needed to memorize every single thing on a page of notes in order to get an A on the test.  When taking the test I would convince myself that I failed. I thought of the worst possible outcome. This was my way of dealing with the bad news that I received over the years at appointments. It gave me something else to focus on. If I prepared for the worst, it wouldn’t seem as bad when the worst happened.

At age 17, this stress and anxiety turned inward. All that was building up over the years, I took out on my own body. I convinced myself I would be able to “cure myself” of all symptoms and struggles, if I just lost some weight and exercised. I became obsessed with this thought. At the time, it was a great distraction from all the physical and mental pain I so badly wanted to ignore. This obsession turned into an eating disorder. I lost 30 pounds in a matter of six months. I struggled through anorexia, bulimia, binge eating, and over exercising. My body image was terrible. I disliked my body for as long as I could remember. I found flaws practically every time I looked in the mirror, even at a young age.

My traumas from chronic illness and the pain, both mental and physical, left me with deep rooted emotional scars. In my 26 years of life, I have managed anxiety, PTSD, body image distortion, addiction in the form of eating disorders, depression, and self-harm. It is so easy for many outsiders to think “you have overcome so much, you should be thankful you are still here.” It is easy for people to think “why would you do that to yourself after everything you have overcome?” The truth is that, what I have so courageously overcome is the very thing that has triggered my emotional responses. I didn’t know how to talk about what I was feeling inside. I didn’t know how to express my fears of hospitals, lack of trust in people, lack of trust and hate for my own body. Now that I have a therapist, I can see just how important they are for anyone who has gone through trauma. 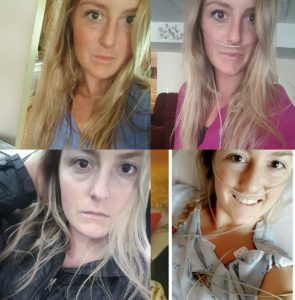 All of the emotions I have now, I choose to feel. I feel the positive emotions and celebrate happiness; I feel negative emotions and allow myself to cry, scream, get angry, and feel the frustration.  I allow myself to feel physical pain and no longer hide under the mask of “I’m fine”. The most important thing to remember is that it’s okay for your children, or you as a CHD warrior, to feel everything so fully.  Emotions are difficult.  Depression, anxiety, and addictions are sensitive topics but they need to be discussed. Use the voice you have. Spread awareness. Trauma leaves scars, both visible and invisible.  The visible ones I’m sure start conversation all the time. Don’t be ashamed to talk about the invisible ones too, that’s how the real healing happens. 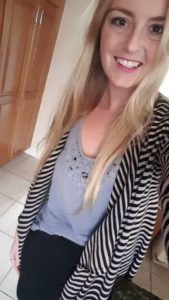 Brittany Foster is from Cranston, Rhode Island. She enjoys writing, blogging, reading, and spending time with friends and family. Brittany is also passionate about advocating for herself and others. Over her 26 years of life, she has learned to live fully with her conditions. Brittany has learned the importance of acceptance and self advocacy, and she hopes to spread some much needed CHD awareness.  Brittany was born with a large VSD that caused pulmonary hypertension, as well as vascular anomalies, including a right sided aorta, aberrant and isolated subclavian artery, and a form of a vascular ring.  She has had open heart surgery, a vascular bypass surgery for subclavian steal syndrome, multiple heart caths and attempted ablations. Brittany also has a dual chamber pacemaker for sinus node disease/ tachy brady/ ventricular dyssynchrony. She is on full time oxygen therapy due to a genetic mutation that caused the structure of her blood vessels to be too small. Her motto in life is to keep tickin’ through it all! Brittany hopes you can do the same, no matter what life throws your way!