Last week, we heard from Abby Hack on heading off to college. This week, we will hear from her mom, Janice. Watching your child leave home for the first time can be worrisome, especially with cardiac issues to consider. Janice shares with us how she has helped prepare Abby to take greater ownership of her own care. 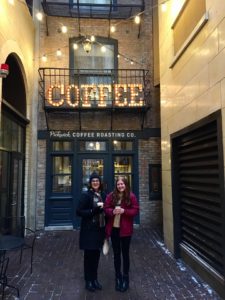 Our cardiac story began about 16 years ago when my daughter was 2.  At one of her pediatrician’s visits, the doctor heard an unusual heart murmur.  The doctor ordered an EKG and discovered that she had an intermittent second and third degree AV block.  The signals in her heart weren’t connecting as they should have been, causing delayed and missed beats.  Abby didn’t show any of the usual symptoms for her condition such as shortness of breath, fainting or chest pain.   In fact, it was just the opposite.  She was a very active kid.  Because she was asymptomatic, we, along with her doctors, decided to postpone putting a pacemaker in and instead monitor the situation.  Our semi-annual visits turned into annual and then biannual visits and still no symptoms.  It looked like she was outgrowing the condition.

Then, Abby started high school.  She joined the swim team her freshman year and started to have chest pain while swimming.  The doctors did the usual tests but the results were drastically different than before.  Her heart rate on the 24-hour Holter monitor averaged 42 beats per minute.  Running full out on the treadmill, she didn’t get above 95 beats per minutes.  The doctors were surprised she wasn’t fainting.  She needed a pacemaker immediately.  Abby received her pacemaker in December 2013 when she was 14 years old.

The surgery was right at a time when she was starting her teen years.  Not long after the surgery, I was at a swim meet for my younger daughter and one of the parents there started talking about the medical issues with their child and how it affected their swimming.  It was a bit of a wake-up moment for me.  Abby and I are both fairly private with our personal lives (our lack of posts on Facebook is one example) and I recognized that it wasn’t my place, as the parent, to be talking about Abby’s medical condition so casually.  She was old enough to decide whether she wanted to reveal that she had a pacemaker, or not.    Unless there is a medical reason for someone to know, I don’t need to bring it up.

When Abby was 15, we attended an event put on by Chicagoland Cardiac Connections for children with pacemakers and ICD’s and their families at Lurie Children’s Hospital.  At one of the sessions, some parents were talking about their kids becoming young adults.  I resolved at that time to get Abby to start taking some responsibility and authority for her medical care.  We started out by having her make her own dentist appointments which gave her some confidence in a low risk setting.

Even before the pacemaker, I always encouraged the doctors to ask Abby directly what her symptoms were. This was really by default as I don’t consider myself having any inner nurse or doctor.  I could do a pretty good job, even with my lack of medical aptitude, to describe her cardiac condition.  But I was caught off guard at one appointment when the doctor asked about her pacemaker.  She replied “I have a pacemaker to address my intermittent high degree atrioventricular block with pacing close to 100% of the time.”  She did a better job describing it than I did!    My encouragement for her to speak up at doctor’s appointments had paid off.

Abby aged out of the general pediatric practice last winter and in the course of changing primary care doctors, it was a good time to also switch over to an adult electrophysiologist.  She wanted either my husband or me to go to the first appointment which was great as it is nice, especially with a new doctor, to have a second pair of ears.  I showed her that she should come prepared with not only copies of previous records, but also a list of questions and concerns.  In fact, she was the one that mentioned that the quarterly readings she does with her remote Medtronic device needed to be changed to the new doctor for review.  She is now keeping her own calendar of dates for visits and pacemaker readings although I also put them on the family calendar so I can remind her just in case she forgets.

Abby is now 18 and is a freshman in college.   She is majoring in global studies and plans to travel the world.  She loves to exercise and her number one criteria in picking a dorm was to be near the recreation center.  Working out is an important aspect of her life and the pacemaker has made this possible.

At age 18, parents no longer have access to their child’s medical records without express permission.  Just like every other parent of a college student, I am helping Abby learn to navigate the health care system both at home and at school.  This is challenging whether you have a cardiac device or not. Ironically, the most difficult task so far has been to get the college health center to accept her immunization records which they kept rejecting on a technicality.  And, we have had a difficult time getting Abby some medication she takes unrelated to the pacemaker.  She has learned a whole new vocabulary about medical records such as “requests for authorization” and that doctors’ offices still use some “ancient” device called a fax machine.

Abby and I found it helpful for me to access her online health record for our family health insurance plan and the online records at the school clinic.  We can log on together to message her doctors or the school clinic as needed.  A few phone calls have been necessary.  Abby is no different than her friends–the hardest thing for teens to learn is that sometimes they need to pick up the phone and call someone.  I also encouraged Abby to visit the health clinic in person which she found helpful.

Her college has a complete tolerance policy meaning that the police can be called for any reason, including drunkenness, without repercussion.  Abby and I talked about the fact that there are bound to be people passed out from drinking on a campus of 35,000 students.  But, it could also be a cardiac event, a diabetic episode, or a myriad of other conditions.  Abby declared she would want to call for help if she saw someone in this situation, just as she hopes others would do so for her in the rare possibility one of her pacemaker leads broke and she fainted.  Perhaps her pacemaker has helped her to learn compassion.

It is now up to Abby to take a more active role in her health and I have every indication she is prepared to be her own advocate.   She still called with a bad cough to see if she should go to the college clinic (the answer was yes!).  But, she understands, and can describe, her cardiac condition and is slowly learning how to work with the school health clinic and her doctors at home.  I have done what I can as a parent and it looks like Abby is going to be just fine.

Janice Hack lives in Chicago with her husband Brad and daughters Abby, aged 18, and Lydia, aged 13. She is the director of a small history museum in suburban Chicago and enjoys volunteering at her children’s schools and for history-related organizations.  In her spare time, she likes to watch PBS shows (especially historical dramas), while walking on the treadmill.  Both Janice and Abby have enjoyed being a member of the Chicagoland Cardiac Connections steering committee, particularly meeting others families who face similar medical issues.  She is grateful for the wonderful care Abby received at Lurie Children’s Hospital.