For the month of May, CCHD has been focusing on American Stroke Awareness Month. In the 4th week of our series, Terese Quarino shares her experience with stroke.

I remember the day, like it was yesterday…. The Wednesday before Labor day weekend, I called my cardiologist to say I felt some funny beats in my heart, but no other symptoms.  He said he would send me a holtor monitor overnight to wear for 24 hours. I did exactly what he told me to do, and when I received a call from him late on a Saturday night, a holiday weekend, I knew something was up!  He told me to pick up two medications at the pharmacy that night, start taking it, and that if I have any fast heart rates, go straight to the ER.  I agreed.  If I didn’t see him in the ER, I would see him first thing Tuesday morning in his office.  He explained everything  to me on the phone, but it came out of the phone like Charlie Brown talking  (Mwa-Mwa-Mwa sound).  I hung up the phone and didn’t tell my parents anything, except that I needed to pick up the medications and be at my doctors office Tuesday morning.The rest of the weekend went fine and we went to my cardiologist office Tuesday morning.

As soon as I arrived, I had an EKG, an echo, and blood work done.  It was determined that I was in heart failure. My heart rate was at about 300 beats per minute.  I met with an electrophysiologist and my cardiologist to determine what would be the best course of treatment.  We decide cardiversion would be the best route. Since I had already eaten breakfast that morning, we would have to wait until the next day.

Wednesday morning, my doctors started with a TEE (Trans-Esophageal Echocardiogram) to see if there are any blood clots that they could see before they performed the cardioversion.  When they didn’t find anything, they moved forward with the cardioversion. After the procedure I was feeling great.  The doctors decided to keep me overnight, until my Coumadin was at a therapeutic level. One of my parents always stays with me after any procedure or surgery.  I told my parents I was fine, and they could go home. Twelve hours after my procedure I had  stroke.

My nurse was in the room, checking on me, and I could not speak. Then my arm started to bend, and it went behind and arched my back. Next, I could not feel anything in my hands or feet.  The nurse left the room, and I remember thinking to myself, “why is she leaving me?” But looking back, I realized she pushed a button before she left. Seconds later, a rush of doctors and nurses came to my rescue.   If it was not for their quick response, the lingering symptoms from my stroke may have been worse.

After my stroke, I had cognitive, physical,and speech therapy, which I’m truly thankful for. I will be honest, I struggled with it! But, step by step, I got through it! I still struggle with how my stroke impacted my everyday life. My handwriting is horrible, it’s significantly worse than before my stroke.  I also have a hard time with recall. At work, when I need to speak at a meeting, I would jot down notes to prepare. Now, if I just write it down, I may not remember what I need to say, so instead I type ord for word in the note section of my phone, so I can read it.  All these issues add up to big issues.

Having a stroke has changed my outlook on life. It has taught me to live everyday to the fullest! My experience with stroke was quite a scary time for me, and I will never forget  how it felt! 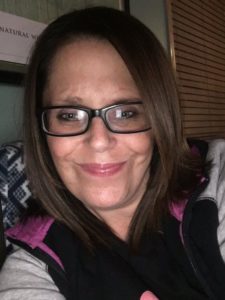 Terese was born with Tetralogy of Fallot in 1973, which was repaired in 1974 at Children’s Memorial Hospital in Chicago, IL. In 1992, she had her second open heart surgery, and mitral valve replacement. Terese’s other medical conditions include a lumpectomy in 1990, and multiple treated aneurysms. She also started dealing with rhythm issues, and still is to this day, which required a cardioversion in 2007. Twelve hours after her cardioversion, Terese suffered a stroke. She has also had two ablations, and had a pacemaker implanted in September 2014.  Since then, Terese’s medical history has been further complicated, in recent years, by being diagnosed with Lupus (SLE) in 2013 and Shrinking Lung Syndrome in 2015. In her free time, Terese loves spending time with her family, friends, and her puppy, Payton. She also enjoys swimming and listening to great music.  She lives each day to the fullest!