As young women with CHD, female patients are often cautioned against the idea of pregnancy, as they start to explore the idea of building a family. This October, we will hear from strong, CHD warrior women, as they share their miracle birth stories. Today, Anik Grenier shares the journey she and her husband took to create their family.

Living with CHD, Transposition of the Great Arteries (TGA) in my case, has brought on a unique set of challenges.  I had a fairly normal childhood in the Ottawa region with minimal cardiac issues until my junior year of high school, where I developed neurally mediated hypotension (NMH) as well as tachycardia and bradycardia.

In 1988 when I was about 4 months old, I underwent a corrective surgery known as the Mustard procedure in Toronto.  It had been the most common treatment for TGA since the mid 60s, but as I approached adulthood, there was not much information available regarding the possibility and effects of pregnancy for someone with my condition.  At my last pediatric cardiac consultation, I was therefore advised against having children naturally.  As a 16 year-old who had always wanted to be a mother, the news was a hard pill to swallow, especially after the rough time I had had in recent years with NMH.

When I met David the following year, it became clear fairly quickly that we were in this for the long haul.  From the beginning of our relationship, I was open with him regarding my CHD and its possible repercussions.  He was always very supportive and told me that there are different ways of becoming parents, if we chose to down the line.  Shortly after, we moved into our first apartment in Montreal and started university.  Because NMH and arrhythmias were still causing me issues, I came to the conclusion that my chosen career path in forensic anthropology would not be realistic so I quit school with a heavy heart and went working as an administrative assistant while I figured out what I wanted to do. 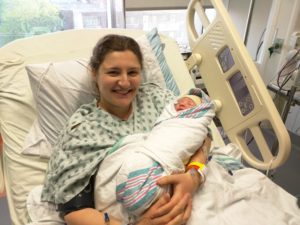 Eventually, my NMH symptoms virtually disappeared and I underwent a successful ablation to treat both arrhythmia’s. I felt as though I had found a new lease on life, and decided to go back to university, majoring in teaching French as a second language.  At this point, I was healthy and David and I we were starting to talk about an engagement and starting a family. At my following cardiac consultation with my ACHD cardiologist, I asked my doctor about the possibility of pregnancy.  To our great relief, we were told that I would need to do a complete assessment of my heart function (including an MRI, a stress test, an echo-cardiogram and blood work) but that if nothing worrisome came up, it would be possible while being closely monitored.  Nothing of note came out of the evaluation so we met with a maternal fetal medicine (MFM) specialist who explained to us the risks involved for myself during pregnancy as well as the risk of passing on a CHD to our children.  In our case, since the risk was only a few percents higher than that of the “general population”, David and I we were comfortable with me carrying our children. 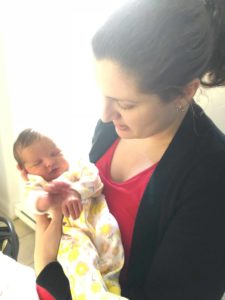 The first time I became pregnant, we went through the normal scope of emotions for future parents: we were elated, scared, nervous and wondered how my heart would cope.  A few weeks later, shortly after our wedding day, I had a miscarriage 8 weeks into the pregnancy.  We were devastated.  At the time, I was really angry at my body, at myself for having a CHD and it took me a long time to come to terms with this.  Over the next year, I had two more miscarriages, both around 8 weeks as well.

The fourth time I became pregnant, we expected the worst again.  But then, it was the end of the first trimester, further than all previous pregnancies, and this little one was still hanging on.  We had our first prenatal OBGYN appointment and all seemed fine, there was a heartbeat.  We became cautiously optimistic.  I was followed at a high risk OBGYN clinic so I had multiple ultrasounds as well as echo-cardiograms every trimester for myself and one for the baby, but overall, it was a “normal” pregnancy.  I delivered a heart healthy baby girl in the cardiac care unit as a precaution after a relatively quick natural labor, but my heart handled it very well.  In my post-partum cardiac evaluation, it was shown that my heart function had actually improved and was therefore given the go ahead to have more children.  Having read many birth stories of women with CHD, I was pleasantly surprised that this was the outcome, as I knew that it is not always the case.

My fifth pregnancy was very similar, although I was more confident about its success this time.  I was again followed at the high risk OBGYN clinic with the same doctor but I only had one echo-cardiogram as my heart was coping well.  I had another natural delivery in the CCU as a precaution without ill affect on my heart health.  David and I feel very fortunate to have been able to go through these experiences, as hard of a journey it was, especially because many couples in our position do not have the opportunity.  We are very grateful for our little family and that our daughters, now two years old and 6 months old, are healthy, happy and discovering the world. 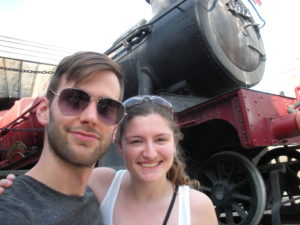 Anik Grenier grew up an only child in a bilingual household in the NCR of Canada.  Having a passion for all things artistic, historical and cultural, she attended university in Montréal, majoring in teaching French as a Second Language.  She now lives in Montréal with her husband David and her two daughters, Zora and Tali where she teaches FLS at the elementary level.