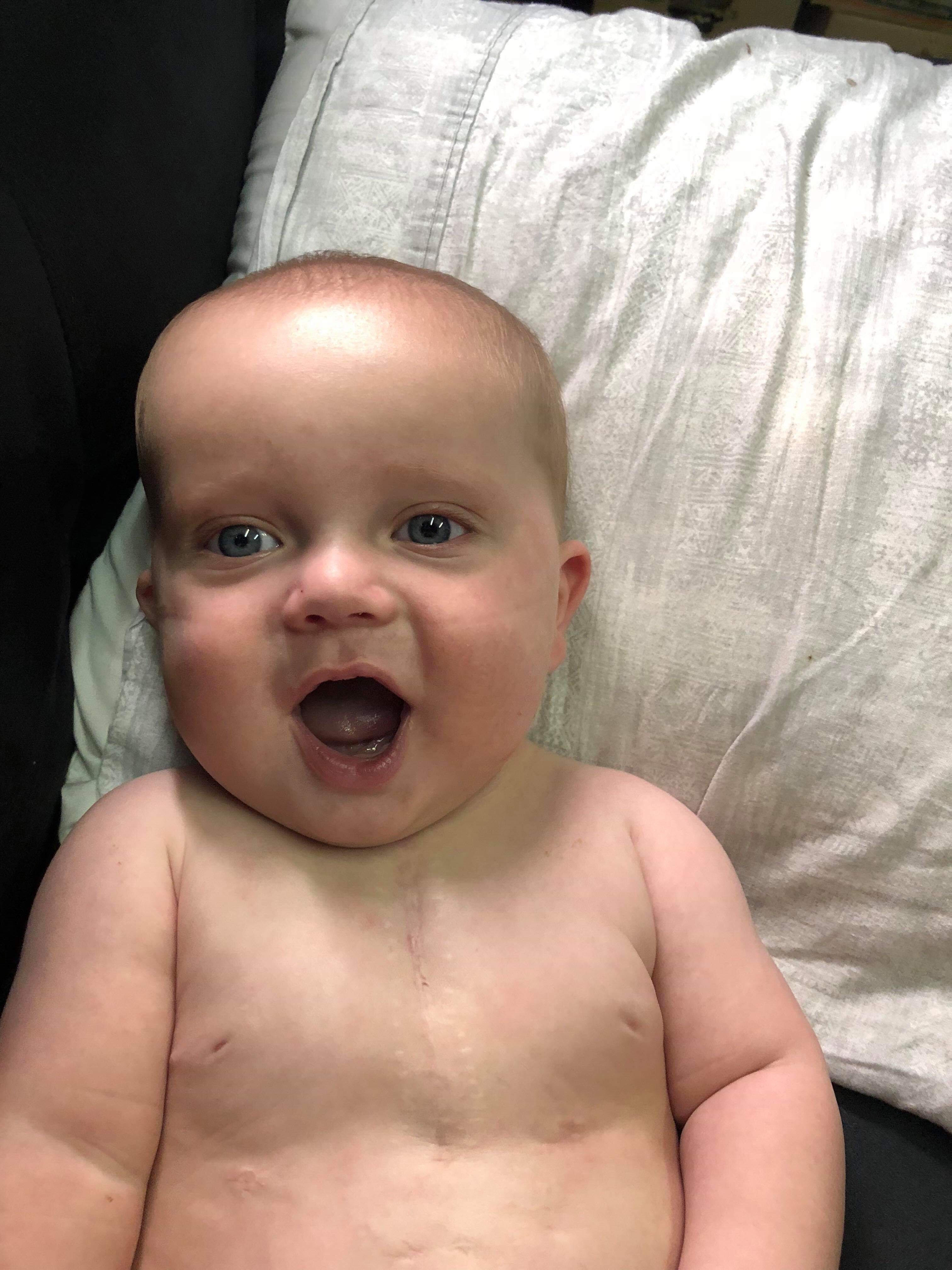 On September 20, 2018, at our twenty week ultrasound, we found out that our beautiful baby would not only be a bouncing baby boy, but also a heart warrior. It took two days and multiple scans to finally be diagnosed with Hypoplastic Left Heart Syndrome (HLHS). Basically he would be born with half a heart.The following days and weeks were filled with heart ache and fear of the future our baby faced.
In January, we relocated to Denver to be close to Denver Children’s Hospital and the doctors that would be treating our little boy. On January 30, we were unexpectedly told we would be delivering early. Eighteen long hours later, Patrick William Walker White made his debut after an emergency cesarean section. He was rushed away to have lines put into his belly button, so they could deliver life saving drugs.
At five days old, “Walker” had his first open heart surgery to place a BT shunt. This would help his heart pump blood to both his lungs and his body. After days on a breathing machine, Walker made great progress and was able to breath on his own. Soon after, he was moved to the CPCU or step down unit. He excelled in eating, which is not usually the case with babies diagnosed with HLHS. Despite the great work in eating, Walker could not breath on room air. Many more scans were done, and it was established that Walker would need a heart catherization procedure to place a shunt into his stent. During this procedure, at less than a month old, Walker’s lung was punctured, causing it to fill with blood. Due to the complication, Walker ended up in cardiac arrest and had to have a chest tube placed. Over the following week, Walker shocked the doctors and healed amazingly! We soon got to leave the hospital, after a total of 35 days.
We enjoyed time as a family around Denver, but it soon became apparent that Walker would need another procedure to place a second stent in this shunt. During the next months and a few short hospital stays, we found out his heart function was declining. Due to the decline in hearts ability to pump blood, the doctors decided his second open heart surgery was going to be performed earlier than expected. At 3 months and 10 days old our beautiful, happy boy was taken in for his second surgery. We were told to expect a short recovery, but it ended up differently. Walker suffered more damage to his lungs while on bypass, landing him in the hospital for close to another month.
On June 8, 2018, at five months old, Walker was finally able to leave Denver and come home to Albuquerque. He has been doing very well and continues to see a cardiologist and pulmonologist regularly. This is not the end of Walker’s journey, because there is no cure for HLHS. He faces at least one more open heart surgery and most likely a heart transplant at some time in his life. For now we love on our sweet boy and cherish every moment and memory.