It is often difficult for parents and loved ones to know what to do in caring for their child during hospital stays, and it can often be a difficult topic to discuss. Christine Martinenza, RN, and Janie Klug, MSN, have implemented this month’s Patient Engagement Tool, The Care Partnership Pyramid, at Nemours/Alfred I. duPont Hospital for Children, which aims to help foster conversation and understanding in how to best allow for parents and medical staff to work as a team.

Many infants born with congenital heart disease (CHD) are transferred to the Cardiac Intensive Care Unit (CICU) immediately after birth or diagnosis for stabilization. As the mothers are still recovering from the delivery, many babies will undergo their first of many surgeries. Following surgery, these newborns are at risk for life threatening complications, require minimal stimulation, and around the clock medical care. It is very common for the medical team to ask families to remain hands off during this critical stage. The period of time spent in this phase of care is variable and for some can be several days to weeks. As the baby heals, the medical team is able to lessen sedation, remove lines and tubes, and gradually increase the amount of stimulation. This process of de-intensifying support can be lengthy and sometimes unpredictable leading many families to describe it as a roller coaster of emotions.

Although this course of events is often necessary for survival, the intensity of the experience frequently leaves parents fearing that their child’s death is imminent, feeling helpless, and struggling to bond with their baby. As the baby recovers and the family can partner more fully in their care, many parents remain hands off due to fear. Commonly there is a lot of variability in the nursing support during this phase, as some nurses may not recognize the need to invite families to partner in basic cares, while others expect the family to participate fully.

These challenges were brought to light in our center when we cared for a baby who was undiagnosed at birth and within just a few days required several surgeries and ECMO life support. As the baby slowly recovered, her mother did not. The nursing staff became very concerned, as the mother was at the bedside all day, every day, but said very little. She had minimal interaction with her baby, even after the baby was well enough to enjoy being held. Through a conversation between the mother and the Developmental Care Team, we learned that the reason she was so withdrawn was that she did not know what she was allowed to with her baby or how to do it. She also shared that she was uncomfortable asking to be more included. Following this realization, the nursing team immediately engaged in teaching basic cares with the mother and were amazed at the difference in the mother’s overall disposition. Her ability to cope once she was able to provide supportive care to her baby was considerably better. It was also noted that the baby’s physical and developmental status improved quickly once her mother was able to partner in many aspects of her care and therapies.

Unfortunately, this mother’s experience is not unique and similar stories occur daily at cardiac centers nationwide. Family integrated care is now being recognized as a potential solution to this type of challenge. To encourage a shift towards this type of care in our center, we developed the Care Partnership Pyramid tool with the goal of helping staff more fully support families in their role as parents while still maintaining the safety of the child. 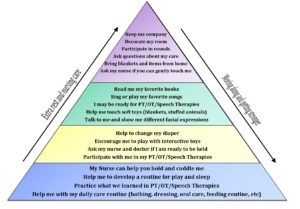 The Care Partnership Pyramid is printed on an 8in x10in laminated card and hangs on the magnetized dry erase Welcome Board at the bedside for the family and care team to use. There is a baby icon that attaches to the pyramid with Velcro and can be moved to the section of the pyramid most appropriate for that patient. The family is oriented to the pyramid upon admission to the CICU and encouraged to provide the cares at their current level and above with the help of the nursing staff. The Pyramid is fluid model which may mean that some days the baby needs more rest and quiet than others, with goal being that the family provide as much care for their baby as is safe in the child’s current state of illness. The care team addresses the patient’s place on the pyramid during daily rounds, and the nurse will later document in the daily nursing note what cares the parents were able to provide.

Once we began using the pyramid, we discovered that it greatly improved communication between families and the care team. The daily assessment of the pyramid allowed the team to explain to the family why their child is at the level that was agreed upon. For some, this opened up the conversation of what education the family would need to be able to provide cares at that level. For others that weren’t progressing, it allowed the team to elaborate on what was preventing the child from tolerating the next level of care. What was most exciting was that these types of conversations were being initiated not only by the care team but frequently by the families as well.

The success of the pyramid relies heavily on staff acceptance of family integrated care and implementing the tool in a manner that establishes culture change, rather than just the introduction of a new practice. We have found that having senior direct care nurses provide the education surrounding family integrated care, introduce the pyramid, and champion the project through the first year of implementation is crucial. However, the initial introduction of the Care Partnership Pyramid can certainly come from families. The understanding that families want and need this type of partnership is the most powerful tool to gaining staff acceptance. Often the best way for families to broach the topic of family integrated care is to communicate to the nursing staff that they would love to help care for their baby but need guidance on ways to do so safely.

The Care Partnership Pyramid has the potential to increase family involvement in developmental care, ease the transition to the stepdown unit, and ultimately promote smoother discharge to home. Placing this simple developmental care tool at the bedside for parents and nurses to utilize as a guide holds promise for increasing parents’ partnership in their child’s care while in the CICU.

Christine Martinenza RN, BSN, CCRN: A graduate of Villanova University in 2006, she immediately jumped into pediatric critical care as a Pediatric Intensive Care Unit nurse at Children’s Hospital of Philadelphia. She found her passion for cardiac care in 2011 when she joined Nemours Cardiac Center at Nemours/A.I. duPont Hospital for Children. Since joining Nemours, she has enjoyed continuing her career as a direct care nurse while also working with many specialties to bring the latest in safety and quality initiatives to the bedside.

Janie Klug, MSN, RN, CPNP, CCRN, CPN: A graduate of La Salle University in 2009, she started her career as a pediatric emergency department nurse. Janie joined Nemours Cardiac Center at Nemours/A.I. duPont Hospital for Children in 2011, and immediately fell in love with Cardiac ICU care. In 2016, she completed her MSN as a Pediatric Primary Care Nurse Practitioner at Drexel University. Janie has since furthered her career at Nemours and has transitioned into the role of Patient Flow Supervisor, where she continues to work to improve care at the bedside.